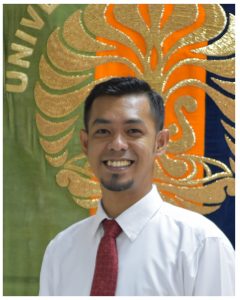 Arius first started his career in the broadcasting industry in post production, QC Department of Private TV O Channel since 2006 while completing his undergraduate education at the Universitas Indonesia. In 2009, he joined the Client Management division of a multinational IT company, InTrust-Asaba. Then, he became a Digital Marketing Specialist from PT. SpeedUp Technology with his last position as Public Relations Manager in 2015. After that, Arius began to develop his business as Marketing Manager & Co-founder of Jakvisual (IT Startup Company) until 2017. In the same year, Arius began joining as a teacher at Communication Study Program, Vocational Education Program, Universitas Indonesia.

Arius has been a member of the Perhimpunan Hubungan Masyarakat (PERHUMAS) since 2018. In addition, he actively participates in various trainings that support his competence as a lecturer and broadcast practitioner. He has also conducted research and publications since 2016. Arius has competency certification in various fields and is also a Certified International Communication Specialist (CICS). The focus of his expertise is in the field of multimedia broadcasting.

Community service which is one of the Tri Dharma of Higher Education is also often done by him. One of them is Pemberdayaan Kelompok Karang Taruna dalam Pengembangan Industri Kreatif Berbasis Digital di Kelurahan Beji Timur, Kecamatan Beji, Kota Depok in 2019.